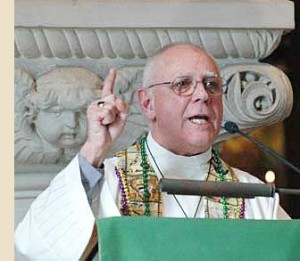 A native Wilmingtonian, the Rev. Rod Welles spent the majority of his life in the ordained ministry as a chaplain, teacher, and headmaster in church sponsored schools. The last seven years of his active ministry, he served as Program Coordinator for the Men’s Day Center of Friendship House, a multifaceted ministry to homeless persons in Wilmington. In retirement, he served as priest associate at SsAM.

Rod served the Diocese of Delaware in many capacities, chairing task force groups for special projects such as the Diocesan Camp and Conference centers, anti-racism and inclusion training, and the Bishop Search Committee. He also served as presiding judge of the Ecclesiastical Trial Court.

Rod died early Monday morning, June 16, 2014. He was surrounded by his beloved wife Sue, his daughter Kierstin, and son Rod. May Rod rest in the eternal habitations and his soul be at rest in the loving arms of God. Funeral arrangements have not yet been made as of this notice.
—Rev. David T. Andrews Jr., Rector

The Rev. Rod Welles died on Monday, June 16, 2014 following a long illness.  He was 79 years old.  Rod was a Wilmington native and one of our senior clergy.  He had a long and distinguished career of service in ministry and in education. As a young man Rod was one of the original counsellors at Camp Arrowhead. Following seminary he was ordained by Bishop Mosley in 1962.  After serving as curate at Christ Church, Exeter, NH, he became chaplain of St. Paul’s School, Concord, NH from 1964-1971.  He was head of the Sewanee Academy at the University of the South from 1977-1982 and the Arlington School, Atlanta, GA from 1982-1986.  Rod was a nationally-known educational consultant for Episcopal and independent schools.  Returning to Delaware, he became actively involved in community service ministries, serving on the staff at Friendship House. He was primary pastor at St. Nicholas’ Church, Newark from 1995-2001.  Rod served our diocese as co-chair of the Bishop’s Search Committee 1997-1998.  In retirement he continued to be involved in ministry at the Episcopal Church of Sts. Andrew & Matthew, Wilmington.

Rod will be remembered for his steady faithfulness, his deep respect for the dignity of every person, and his love of the natural world.  At this time, service plans are incomplete.  Our prayers are with his wife, Sue, and their family as they mourn this loss. May this faithful servant rest in peace.

The Congregation Poses for Goodbye Photo 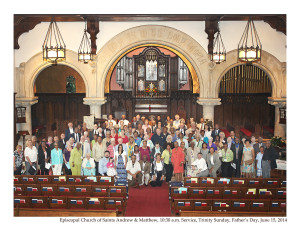 Click here or the above photo to see it larger. This photo is of the congregation at the 10:30 a.m. service on Trinity Sunday, June 15, 2014. They gathered at the front of the church to send their good wishes to the Rev. Rod Welles as he lay dying.

SsAM IS NOW RECEIVING NAMES FOR OUR NEXT RECTOR! If you are a clergy person and interested in our open rector position, we invite you to … END_OF_DOCUMENT_TOKEN_TO_BE_REPLACED

You are invited to worship God with us in person this Sunday at 8:00 or 10:30 a.m. in downtown Wilmington, Delaware. Our newly-ordained … END_OF_DOCUMENT_TOKEN_TO_BE_REPLACED

The Rev. Kevin Clayton Brown, will celebrate Eucharist for the first time on Sunday, February 5, 8:00 am and 10:30 am By the Grace of God … END_OF_DOCUMENT_TOKEN_TO_BE_REPLACED

Charisse L. Rodgers has served the church in numerous capacities, to include, vestry person, church treasurer, ECW board, diocesan … END_OF_DOCUMENT_TOKEN_TO_BE_REPLACED

A reflection for February 5, 2023 by Mary Lou Edgar. It is hard to believe that we are in the middle of winter. We have had many nice … END_OF_DOCUMENT_TOKEN_TO_BE_REPLACED

An interview with Rosetta Henderson and a digital exhibit exploring her life and accomplishments is now at the Hagley Museum and Library. … END_OF_DOCUMENT_TOKEN_TO_BE_REPLACED

Children’s Chapel will meet on February 12 and 26, and on every second and fourth Sunday at 10:30 a.m. in Crypt Hall. Children have several … END_OF_DOCUMENT_TOKEN_TO_BE_REPLACED