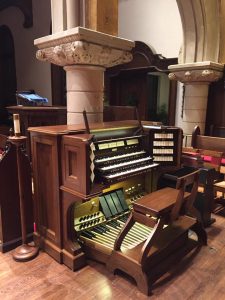 The new pipe organ for the Episcopal Church of Saints Andrew & Matthew (SsAM) in Wilmington, Delaware is Quimby Pipe Organs’ Opus 72, and is comprised of 45 ranks divided into four manual divisions and pedal, playable from a new three manual and pedal console. The new organ replaces a two-manual Möller, Opus 7114, which was completed in 1948.

The Episcopal Church of Saints Andrew & Matthew is the successful result of the combination of two established Episcopal congregations in Wilmington, in 1995. Since that time, the Episcopal Cathedral of St. John in Wilmington was closed, and many congregants moved to Sts. Andrew & Matthew. Because of this, as a symbolic gesture of bringing many disparate parts into a unified whole, ranks of pipes from all three church organs have been incorporated into the new Quimby organ. In addition to the St. Andrew Möller, pipes were used from both the St. Matthew 1956 Möller, Opus 8832, and the 1920 Möller, Opus 2992 (rebuilt by Möller in 1952 and 1967) from the Cathedral Church of St. John. Some of the pipes in the St. Andrew Möller were retained from the church’s former 1907 C.S. Haskell organ, and have also been reused in the new organ.

These pipes have been skillfully restored, rescaled, and re-voiced so that they form integral parts of an organ ensemble that is unique to Quimby. Together with new ranks of pipes, all form a diverse but coherent whole where individual voices are developed for individual beauty and maximum harmonic development, but also great blending capacity.

The separately enclosed Swell and Great divisions are located together in the chamber that housed both the St. Andrew Möller and the previous C.S. Haskell. The primary pedal ranks are enclosed with the Great. The Choir division is located in an expression enclosure in a newly constructed chamber on the opposite side of the Chancel. Both chambers are fronted by new non-speaking façade pipes constructed to replicate closely the original 1907 C.S. Haskell façade pipes, which were reused by Möller in 1948. The Antiphonal division is unenclosed, and is located in an alcove in the rear Gallery where Möller previously installed an Antiphonal division in 1957, where the pipes are arranged on either side of a rose window.

As with other recent instruments, our work here draws from several antecedents for inspiration, resulting in a tonal style that is entirely our own, and no copy of any historical work. As such, it becomes a part of a historical continuum from which lessons are taken, and new concepts are explored within the framework of an English-American 19th and 20th century heritage. Of special note are the Diapason choruses, which are inspired by the work of 19th century English organ builder T.C. Lewis, and which feature generously scaled pipework, voiced to optimum harmonic potential, that enables the constituent chorus pitches to lock into an integrated ensemble while also filling the church with grandeur and presence.

The reeds are also unique to Quimby Pipe Organs. The Swell Chorus reeds are our own synthesis of the French and English schools, in order to provide fire and brilliance combined with a fundamental tone that simulates the “bourdon tone” that reverberant stone buildings impart to fiery French Trompettes—here, in the context of a much less resonant space. The Great Trumpet is squarely from the English tradition, and is more round, but still brilliant. The Harmonic Trumpet, located in the Antiphonal, speaks with a heroic, commanding voice capable of solo lines over full organ ensembles.

The Swell Oboe is also from the English tradition, and will function well with both the foundation stops, and also as a lyrical solo reed. The Choir Clarinet is after the tradition of twentieth century American organbuilder Ernest M. Skinner. The Choir English Horn is the representative rank from the Cathedral of St. John, and was constructed by Möller for their 1920 organ in that church, Opus 2992.

The console, built by Jim Schmidt, is a departure from our standard practice, and was modeled on the elegantly compact and attractive three manual console built by Aeolian for their 1930 three-manual and pedal instrument at Memorial Presbyterian Church in St. Louis, and features tilting stop tablets on angled jambs.

New Quimby-Blackinton slider windchests have been constructed for the primary manual divisions, with extended ranks on new electro-pneumatic unit windchests.

The organ was completion in January 2017 with Service of Dedication (featuring David Christopher and the SsAM Choirs) on Sunday 19 February 2017 at 4:00 p.m. and the Dedicatory Recital (given by Ken Cowan) on Saturday, 25 February 2017 at 7:00 p.m.

About the Organ Restoration Project and its Capital Campaign

Join The Friends of the Katherine Esterly Organ

SsAM IS NOW RECEIVING NAMES FOR OUR NEXT RECTOR! If you are a clergy person and interested in our open rector position, we invite you to … END_OF_DOCUMENT_TOKEN_TO_BE_REPLACED

The Rev. Deacon Clay Brown will be ordained a priest on Saturday, February 4, at 11am. He joined the Episcopal Church of Saints Andrew … END_OF_DOCUMENT_TOKEN_TO_BE_REPLACED

You are invited to worship God with us in person this Sunday at 8:00 or 10:30 a.m. in downtown Wilmington, Delaware. Our newly-ordained … END_OF_DOCUMENT_TOKEN_TO_BE_REPLACED

Silent Walk for Justice and Peace, 5:30pm on Friday, February 3 Join us for this peaceful, prayerful walk through the center of … END_OF_DOCUMENT_TOKEN_TO_BE_REPLACED

An interview with Rosetta Henderson and a digital exhibit exploring her life and accomplishments is now at the Hagley Museum and Library. … END_OF_DOCUMENT_TOKEN_TO_BE_REPLACED

A reflection by Danny Schweers for January 29, 2023. Why did our companionship, in spite of events, continue as cheerfully as ever? Why … END_OF_DOCUMENT_TOKEN_TO_BE_REPLACED

The next walk begins on Friday, February 3 at 5:30 p.m. in the SsAM parking lot, 713 N. Shipley Street. Join us for this peaceful, … END_OF_DOCUMENT_TOKEN_TO_BE_REPLACED

Children’s Chapel will meet on February 12 and 26, and on every second and fourth Sunday at 10:30 a.m. in Crypt Hall. Children have several … END_OF_DOCUMENT_TOKEN_TO_BE_REPLACED