Helen Thomas was one of the few people I already knew when I moved to the Lorelton Retirement and Assisted Living Community seven years ago. She, too, was a member of SsAM, and although I didn’t know her well, at 94, she was a sweet, charming and absolutely “sharp as a tack” force.

Through her efforts, we had a weekly class in Tai chi here, and she encouraged me to join and even gave me private lessons. She felt that Tai chi would help my cerebral palsy. Her enthusiasm gave me the willingness to try, but after some effort, I told Helen that Tai chi was not for me. I was one of Helen’s few failures, but if she held it against me, she never let it show.

Helen lived at the Lorelton for over 29 years. Before dying last Sunday, July 31, 2022 at the age of 101, she was our longest living resident here. Now there are only three residents who have lived here longer than I. She moved in with her husband, John, in 1993. John died in 2002, and Helen lived here another 20 years without him.

Helen was born in China to Episcopalian missionaries. 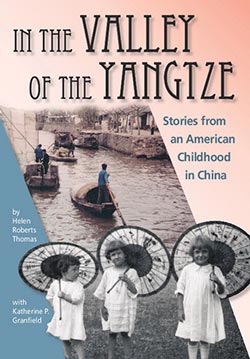 Marrying a duPont chemist, she moved to Delaware, where she worked tirelessly for women’s rights, co-founding the first chapter in Delaware of the National Organization of Women (NOW) in 1970. She returned to teaching at the Delaware Technical School. She was an accomplished artist and some of her works hang in the hallways of the Lorelton.

Helen wrote her memoirs — “In the Valley of the Yangtze” — at age 90, with her daughter, Katherine. You can find it for sale on Google if you are so inclined.

The pandemic was unkind to Helen and during the lockdown she lived with the fear of dying without seeing her children, another kind of COVID victim. May she Rest In Peace.

I will miss her quiet humor.

You are invited to praise God with us Sunday, December 11 at 8am and 10:30am in downtown Wilmington, Delaware. The Rev. James M. Bimbi is … END_OF_DOCUMENT_TOKEN_TO_BE_REPLACED

Children’s Chapel meets on second Sundays at 10:30 a.m. in Crypt Hall. Our next meeting is Sunday, December 11. Children will have several … END_OF_DOCUMENT_TOKEN_TO_BE_REPLACED

A Christmas Party for Youth & Young Families was scheduled for Sunday, December 11, but it has been postponed. Youth and … END_OF_DOCUMENT_TOKEN_TO_BE_REPLACED

A reflection by Danny Schweers on Isaiah, Chapter 35. It is easy to get lost, but not on the Holy Highway. God is there to guide us. We … END_OF_DOCUMENT_TOKEN_TO_BE_REPLACED

Rosie was featured in the December, 2022 issue of the Delaware Communion, in an article discussing religious orders within the Episcopal … END_OF_DOCUMENT_TOKEN_TO_BE_REPLACED

An Advent reflection by Mary Lou Edgar, December 2, 2022. This Sunday begins the second week of Advent. I have always thought of Advent in … END_OF_DOCUMENT_TOKEN_TO_BE_REPLACED

2022-11-02 Update from the Rector Search Committee Many thanks to everyone who contributed input to the Parish Profile at coffee hours, … END_OF_DOCUMENT_TOKEN_TO_BE_REPLACED