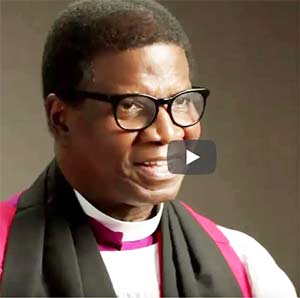 Click here to see the YouTube video of Maryland Bishop Eugene Sutton’s challenge the Episcopal Church to “tear down the walls” of division across both church and community, to do it with love, truth-telling, reckoning, and reconciliation.

Racial justice, reconciliation, and healing topped the agenda of the 80th General Convention. Click here to read the July, 2022 newsletter from The Episcopal Church reviewing the Convention.

The Official Acts of The 80th General Convention

The 80th General Convention of The Episcopal Church is one for the history books, and not just for the decisions made but also for how the COVID-19 pandemic changed the way the church conducted its business.

Bishops and deputies had floor debates only on more controversial measures or on actions that they wanted to raise to greater prominence. Among those essential actions, the bishops and deputies passed a $100.5 million budget for the next biennium. The 81st General Convention is scheduled for the summer of 2024 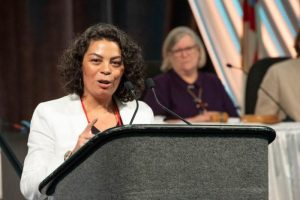 They also approved the first reading of a constitutional change to clearly define the Book of Common Prayer, continued the church’s commitment to reckoning with its history of racism, elected Julia Ayala Harris (pictured) to succeed the Rev. Gay Clark Jennings as House of Deputies president, elected the Rev. Rachel Taber-Hamilton as vice president, and agreed to the reunification of two dioceses in Texas. Click here to see the resolutions.

Ayala Harris is the first Latina and the youngest person elected to lead the house. The Rev. Rachel Taber-Hamilton, of Shackan First Nation, is the first Indigenous and first ordained woman to serve as vice president. Ayala Harris and Taber-Hamilton are the first people of color serving together as leaders of the House of Deputies.

Much of the new spending in the budget is tied to resolutions proposed by the Presiding Officers’ Working Group on Truth-Telling, Reckoning and Healing. Central among them is Resolution A125, for which the budget includes $400,000 in start-up funds for a new Episcopal Coalition for Racial Equity and Justice.

The budget plan, as proposed by the Joint Standing Committee on Program, Budget and Finance, includes spending $225,000 on research to confront The Episcopal Church’s historic ties to the federal system of Indigenous boarding schools, as outlined in Resolution A127.

Resolution A086 would allocate money toward making a priority the development and support of programs that respond to eco-justice concerns, address environmental racism, and work to alleviate environmental burdens on Indigenous communities, and to provide training and financial aid and other resources for the work.

Resolution A052 clarifies the mandate of the Executive Council Committee on Anti-Racism and Reconciliation. Resolution C058 requires the Executive Council to respond to the church’s racial audit of leadership. Bishop Eugene Sutton of the hosting Diocese of Maryland preached about The Episcopal Church’s legacy of racism during his sermon on July 10.

Above is from an article by Mary Francis Schjonberg.

The Union of Black Episcopalians ( the “UBE”) has been very successful in its work at The General Convention. It’s four members who ran for Executive Council were all elected: Joe McDaniel, Jr, Tivaun Cooper, Annette Buchanan and Dianne Audrick Smith. It has also enjoyed a successful venture with the passage of legislation. Fifteen of the eighteen resolutions that were introduced by the Black Deputies, who are affiliated with the UBE, have been adopted by The General Convention. The final status of its resolutions is as follows:

The 80th General Convention of the Episcopal Church, July 7-14, 2022 in Baltimore, Maryland

The General Convention is the governing body of the Episcopal Church. It meets every three years. It is a bicameral legislature (a legislature that has two houses) that includes the House of Deputies and the House of Bishops, composed of deputies and bishops from each diocese. During its triennial meeting, deputies and bishops consider a wide range of important matters facing the Church. D-L Casson, our Church Administrator, was the chair of the Delaware Deputation.

You are invited to praise God with us Sunday, December 11 at 8am and 10:30am in downtown Wilmington, Delaware. The Rev. James M. Bimbi is … END_OF_DOCUMENT_TOKEN_TO_BE_REPLACED

Children’s Chapel meets on second Sundays at 10:30 a.m. in Crypt Hall. Our next meeting is Sunday, December 11. Children will have several … END_OF_DOCUMENT_TOKEN_TO_BE_REPLACED

A Christmas Party for Youth & Young Families was scheduled for Sunday, December 11, but it has been postponed. Youth and … END_OF_DOCUMENT_TOKEN_TO_BE_REPLACED

A reflection by Danny Schweers on Isaiah, Chapter 35. It is easy to get lost, but not on the Holy Highway. God is there to guide us. We … END_OF_DOCUMENT_TOKEN_TO_BE_REPLACED

Rosie was featured in the December, 2022 issue of the Delaware Communion, in an article discussing religious orders within the Episcopal … END_OF_DOCUMENT_TOKEN_TO_BE_REPLACED

An Advent reflection by Mary Lou Edgar, December 2, 2022. This Sunday begins the second week of Advent. I have always thought of Advent in … END_OF_DOCUMENT_TOKEN_TO_BE_REPLACED

2022-11-02 Update from the Rector Search Committee Many thanks to everyone who contributed input to the Parish Profile at coffee hours, … END_OF_DOCUMENT_TOKEN_TO_BE_REPLACED