A reflection by Danny Schweers, 8 October 2022. 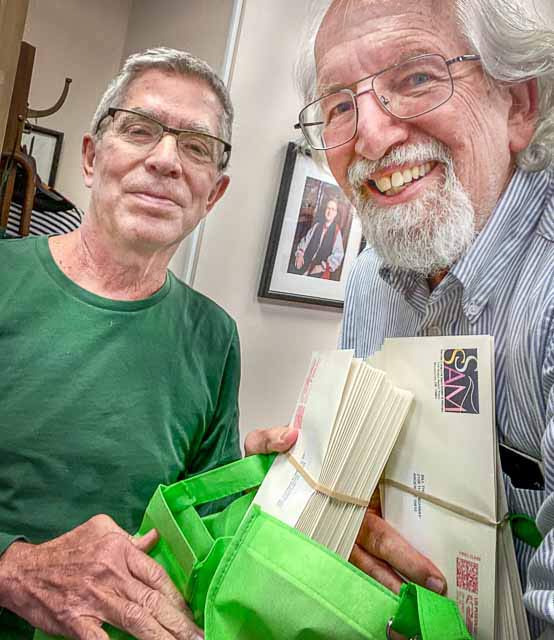 Thursday at church began with a stewardship mailing but I was back again on Friday and Saturday — for a potluck supper, a funeral, and searching for a new rector.

John Goodill, M.D. was my assistant (or was it the other way around?) as we got over 200 stewardship letters and pledge forms out the door and to the post office. We folded, stuffed, labeled, sealed, metered, and — talented guys that we are — we talked, which always makes time go faster. I learned a bit about palliative care, John’s area of medical practice.

Both of us were eager to get these stewardship letters and pledge forms out. If you have served on a committee, you know that, after timelines are set, you often discover you are weeks behind schedule from the very beginning. That’s where we were. Our stewardship committee had decided to have a seven-week campaign to coincide with the Season of Creation, October 9 through November 20. This mailing was to be our first communication, the announcement of the campaign.

I won’t say it was a miracle we got the stewardship letter and pledge form out so quickly, four days from conception to post office, but I will say that I have learned to put more faith in God when success seems impossible. The photo is of John (on the left) and me with the envelopes in the bag.

One new thing this year is that our stewardship goal is 100% participation rather than having a money goal. If you consider SsAM to be your church, use the paper form or click here to use the on-line pledge form.  Any amount gets us closer to our goal of 100% member participation. 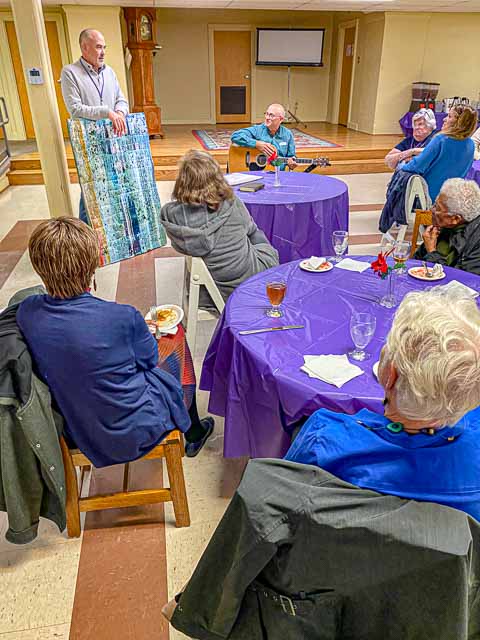 Our church must be one of the last to drop the COVID-19 mask mandate and social-distancing requirements. In part, that made our pot-luck supper on Friday a delightful experience. But let’s give Nathan Blevins credit for welcoming everyone to the event and telling us about himself and his wife, Sarah Elizabeth Wiggins. The two are our church’s newest members. Both were received into the Episcopal Church only five days earlier. In the photo, Nathan is showing us a sample of his art work, something he does for serious fun. I like the idea of having a potluck supper every time someone joins the congregation.

Because the Rev. Peter Huiner was present, I got to taste his delicious macaroni and cheese. Taste? I did more than taste. I had two helpings!

Whenever the Rev. James M. Bimbi is present, you can count on a sing-along with Jim on guitar. Many songs were sung after we had eaten.

What you can’t anticipate at a SsAM potluck is that Pat Hampton will open her heart to share a confession. She told the story of how she recently felt disrespected by a fellow Christian. In her confession, she made fun of herself, her anger and indignation. She humorously described how she slowly moved from isolation to conversation and forgiveness, arguing with herself. She told how she had the wrong end of the stick. That won her applause! 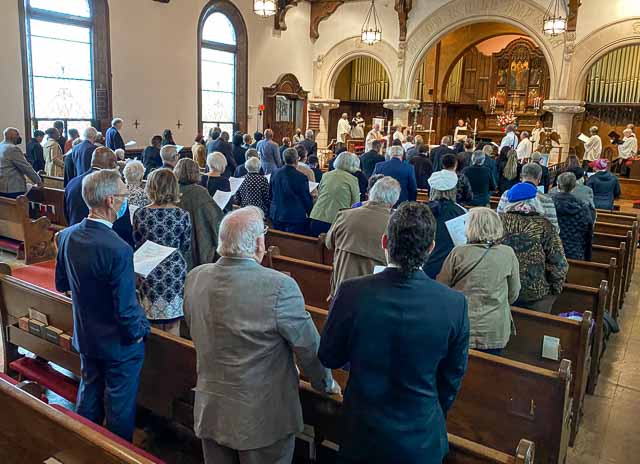 Peggy Shane, Mary Morgan, and I were elected to the Vestry in June, 2019. At the end of our three-year term, our last task was to find five fellow members willing to serve. We contacted over 55 members but as the mid-June deadline approached, we had found only two. I remember calling Peggy to discuss further efforts and was surprised when her husband, Ron, answered her phone. He was taking Peggy to the hospital and couldn’t talk just then. She died just days later, a shock to those of us with whom she had been working just the week before.

At Peggy’s funeral on Saturday, I was delighted to see Rachel Gaskell and Nana Soto seated down front with their families. Just the week before, both had agreed to serve on the Vestry. After three months with vacancies, all twelve spots on the Vestry are now full. Both women, it turns out, were close friends of Peggy and spoke touching words to us who were gathered for her funeral. To see the video of Peggy’s funeral, click here to visit the SsAM YouTube channel.

Sherry Goodill, Ph.D., chairs the Rector Search Committee. Yes, John is her husband and, yes, they are a pair-o’-docs. Giving into the temptation to make yet another pun, I will say my Thursday to Saturday was not only good, it was Goodill to Goodill.

Because I chair SsAM’s Communications Committee, Sherry Goodill wanted to discuss how her committee could inform church members about the rector search process. We talked for an hour! I would like to say I learned something about the creative art therapies Sherry teaches at Drexel University, but we were not stuffing envelopes.

In the months ahead, you can expect frequent reports from the Rector Search Committee as they move forward. These reports will be emailed to members, posted on the SsAM website, and printed in Sunday’s Weekly Vision. You can expect a survey. To learn how you can be involved, click here to see the Clergy Transition posts on our website.

ABOUT THE AUTHOR: Danny N. Schweers chairs SsAM’s Communication Committee. He is an active photographer and writer. Click here to visit his website.

You are invited to praise God with us Sunday, December 11 at 8am and 10:30am in downtown Wilmington, Delaware. The Rev. James M. Bimbi is … END_OF_DOCUMENT_TOKEN_TO_BE_REPLACED

Children’s Chapel meets on second Sundays at 10:30 a.m. in Crypt Hall. Our next meeting is Sunday, December 11. Children will have several … END_OF_DOCUMENT_TOKEN_TO_BE_REPLACED

A Christmas Party for Youth & Young Families was scheduled for Sunday, December 11, but it has been postponed. Youth and … END_OF_DOCUMENT_TOKEN_TO_BE_REPLACED

A reflection by Danny Schweers on Isaiah, Chapter 35. It is easy to get lost, but not on the Holy Highway. God is there to guide us. We … END_OF_DOCUMENT_TOKEN_TO_BE_REPLACED

Rosie was featured in the December, 2022 issue of the Delaware Communion, in an article discussing religious orders within the Episcopal … END_OF_DOCUMENT_TOKEN_TO_BE_REPLACED

An Advent reflection by Mary Lou Edgar, December 2, 2022. This Sunday begins the second week of Advent. I have always thought of Advent in … END_OF_DOCUMENT_TOKEN_TO_BE_REPLACED

2022-11-02 Update from the Rector Search Committee Many thanks to everyone who contributed input to the Parish Profile at coffee hours, … END_OF_DOCUMENT_TOKEN_TO_BE_REPLACED