Communion in a Circle!

One innovation of the 2015 Annual Meeting was to include the meeting as part of worship. When it came time for communion, we formed one large circle around the edge of the auditorium. In the panorama photo above,  we see half the congregation, from the front of the auditorium on the left, to the back of the auditorium, on the right. What an inspiration it was to look around the room and see so many familiar faces standing as one church. The auditorium could barely hold us. Next year we hope to have so many new members that we won’t fit! Click here or the photo above to see it larger.

Click here to listen to the 6/14/2015 Annual Meeting sermon by the Rev. David Andrews. There is an art to studying and to planning. Everyone should pray daily, study, and plan. We should do this individually, but also as a church.

Photos from the Past Year

A YouTube slide show of images from June 2014 thru June 2015, as presented at the Annual Meeting. 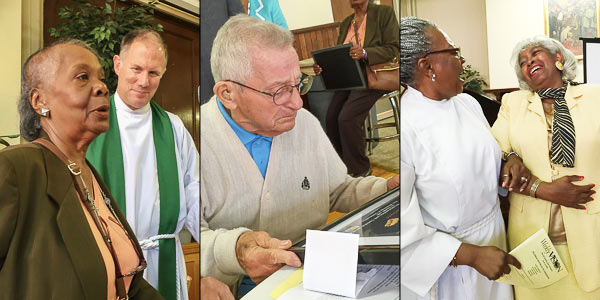