You are here: Home / What We Do / Volunteer in the Community! / History of Wilmington Garden Day 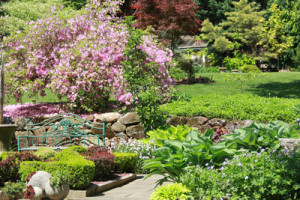 In 1947, well before their consolidation in 1996, St. Andrew’s and St. Matthew’s were still separate Episcopal churches in Wilmington, Delaware. A group of women from St. Andrews, led by Mrs. Charles Richards, decided to raise some money to donate to a children’s program at nearby St. Matthews. They came up with the idea to have a garden tour, something new to our city. In the first year, seven gardens were on view and $100 was raised.

After a couple of years, St. Michael’s School and Nursery became the beneficiary and the Cathedral Church of St. John became an additional sponsor. In the 1950s, houses were added to the tour. In the early 1970s, Calvary-Hillcrest Church and, in later years, St. Barnabas Church became sponsors as well. Today Christ Church Christiana Hundred in Greenville and St. Nicholas, Newark are very involved and are considered unofficial sponsors.

Through the years, many members of Saints Andrew and Matthew have headed committees and provided manpower for this tour which has traditionally provided funding for various children’s organizations as well as Friendship House.

First Fridays at 5:30 p.m. Next walk is Friday, March 5! Since June 19, 2020, SsAM and other churches have been sponsoring silent Walks … END_OF_DOCUMENT_TOKEN_TO_BE_REPLACED

Use Facebook or YouTube to worship with us this Sunday at 10:00 a.m.! Coffee Hour follows using Zoom. We have gone back to pre-recorded … END_OF_DOCUMENT_TOKEN_TO_BE_REPLACED

The members of three Wilmington Churches continue their collaboration on issues of racial justice on Sunday, March 7, at 3:00 p.m. Please … END_OF_DOCUMENT_TOKEN_TO_BE_REPLACED

Our next 25th Anniversary Event is Sunday, March 14, at 3:00 p.m. The Zoom program on the 14th of March will continue the exploration of … END_OF_DOCUMENT_TOKEN_TO_BE_REPLACED

How to Observe a Holy Lent during a Pandemic.  I invite you, therefore, in the name of the Church, to the observance of a holy Lent, … END_OF_DOCUMENT_TOKEN_TO_BE_REPLACED

The Importance of Getting Vaccinated:  The vestry of SsAM and I strongly recommend that you schedule a COVID-19 vaccination when you … END_OF_DOCUMENT_TOKEN_TO_BE_REPLACED

Our building is closed but we are busier than ever! Monthly Walks for Justice and Peace First Fridays at 5:30 p.m. Next Walk is Friday, … END_OF_DOCUMENT_TOKEN_TO_BE_REPLACED

In February we celebrate the contributions of Black people. It is a time to reflect on the struggle for racial justice. 2021’s theme is “The … END_OF_DOCUMENT_TOKEN_TO_BE_REPLACED

You can make a one-time donation or set up a donation that repeats weekly or monthly. A click on the button will bring you to a secure … END_OF_DOCUMENT_TOKEN_TO_BE_REPLACED

Here is a list of books, articles, and videos that enlighten us about race, race relations, racial history, and related topics. Click here … END_OF_DOCUMENT_TOKEN_TO_BE_REPLACED

If you want to make your pledge to SsAM for 2021, you can use this on-line form, which does NOT ask for bank account or credit card … END_OF_DOCUMENT_TOKEN_TO_BE_REPLACED