We have been gathering together!

Yes, there is something odd about celebrating Independence Day while staying isolated in our dwellings, hardly daring to venture outside, wary of anyone coming within six feet of us, our church closed. Even so, we at SsAM can celebrate some recently successful gatherings. 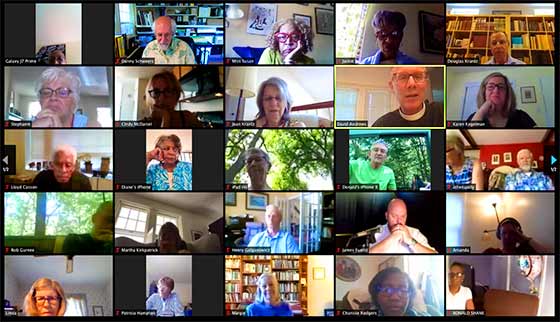 A Conversation About Racism, Sunday, June 28

Just last Sunday, some 60 of us gathered together in front of our devices to join an on-line discussion. “Repairing The Breach: A Conversation About Racism” was hosted by Fr. David Andrews, Canon Lloyd Casson, and Rabbi-in-Residence Douglas Krantz. Something I had never experienced before was seeing a large Zoom meeting break into small groups. Suddenly, instead of seeing a sea of faces, there were only six of us sharing our personal histories of race relations. It was video, but even so, it was truly revelatory to get to know each another better, in some depth, about a difficult topic.

Many viewpoints were aired in those small groups and in the larger meeting. One point made frequently was that most African-Americans grew up believing that their actions reflect on their entire race, that they had to be on their best behavior in public to protect the image of their race and, even today, they cannot help but fear indiscretions by others of their race tarnish their whole race, including themselves. If you are White, when was the last time, if ever, that you felt that another person of your race, acting badly, lowered the standing of your race and made you fear others will think badly of you? A “burden” is how some described it, being judged by one’s race and not as individuals.

Note: If you were not notified of this and other Zoom video-conference meetings, or find it difficult to connect, please contact us!

A Walk for Justice and Peace, Friday, June 19

Some one hundred people — in person, masked, and socially distanced — stood outside First & Central Presbyterian Church on Friday, June 19 — Juneteenth — and then walked silently and prayerfully to our church. Our hope was to shine a light on the recent death of George Floyd at the hands of police in Minneapolis, Minnesota, and on so many other similar, needless deaths. Before we started walking, Presbyterian Elder Ellen J. Roberts, Rev. Dr. Alison Halsey, Fr. David Andrews, and U.S. Senator Chris Coons spoke to us. In the audience were representatives of other churches including Concord Presbyterian, Grace Methodist, Riverfront Church, Trinity Episcopal, and Westminster Presbyterian. Also there was the Rt. Rev. Kevin Brown, Bishop of the Episcopal Church in Delaware. From there, we all walked southwest on Market Street and made our way to the SsAM parking lot, where people gathered under the “Black Lives Matter” banner that had been painted by our members and hung on the side of our church on June 1. Then we knelt in prayer for eight minutes and 46 seconds — the amount of time that the police officer knelt on George Floyd’s neck, killing him. To see photos of the event and links to related items, visit: http://www.ssam.org/photos-walk-for-justice-and-peace/

Five days earlier, on Sunday, June 14, some 70 members of our church attended the annual meeting via video and phone. Reports were few and it was all over in under an hour. In particular, we thanked four members for having served on the vestry the past three years: Jenna Christy, Norwood Coleman, Nana Soto, and Linda Whitehead; and we welcomed four new vestry members: John Goodill, Pat Hampton, Sharon Leyhow, and Wanda Smith. While neither Mary Meese Swain nor Michelle Smith were elected, their willingness to serve means that other opportunities to serve our church will, no doubt, be offered to them soon.

Usually, when our annual meetings are in person, ballots are passed out and collected — not an option this year! Instead we did a mix of on-line voting and paper balloting. 118 members voted on-line. Their votes were not secret, but were only seen by three tellers. The 14 paper ballots were secret, a slower process since the ballots had to be mailed out and then mailed back in, but the entire process worked smoothly, thanks primarily to Jenna Christy.

Rachel Gaskell and Peggy Shane continue as our senior and junior wardens; Bernard Fisher, as our treasurer. We are looking for a secretary to the vestry, which could be any member, not necessarily a member of the vestry. You?

Worship services are broadcast every Sunday on YouTube and Facebook at 10:00 a.m. Since they are pre-recorded, not live, they can we watched any time after 10:00. There are live celebrations of Morning and Evening Prayer on Facebook on Tuesdays, Thursdays, and Saturdays, at 8:00 a.m. and 5:00 p.m. Beginning in August, you can join Rabbi Douglas Krantz and Father David for Bible study on Tuesdays at 10:00 a.m. There will be a virtual Coffee Hour in August. At some point, a Financial Town Hall Meeting led by the Finance Committee. It will review the current operating budget. Finally, you can schedule a one-on-one meeting with Fr. David, always enlightening!

Pledge Income Down 24% Since March 22

With the church closed, we expected smaller donations from people who had pledged. We guessed — how could we know? — that pledges would go down 13%. That is what happened in 2008, during that economic downturn. As it turns out, pledges are down 24% since March 22, a decline nearly twice what we estimated. If this drop continues, the Vestry of SsAM will have to drop something from its budget while, at the same time, remaining true to our core values and faithful to our mission and vision statements. Whatever we receive, we give thanks!

The SsAM Vestry is assigning vestry liaisons to ministries, reviewing by-laws, and monitoring the endowments. Canon Martha Kirkpatrick will lead a virtual vestry retreat on August 8 at which time we will imagine how our church might blossom in the years to come.

At some point, in small ways at first, our church will begin to gather in person. If you have ideas or concerns about our re-opening, please contact us!


——————————————-
NOTE: This Vestry View is our way of sharing with you the issues facing SsAM. We are sending it out by email and posting it on the SsAM website, where you can find an archive of our communications. ACTION ITEM: Click here to send us your comments!

First Fridays at 5:30 p.m. Next walk is Friday, March 5! Since June 19, 2020, SsAM and other churches have been sponsoring silent Walks … END_OF_DOCUMENT_TOKEN_TO_BE_REPLACED

Use Facebook or YouTube to worship with us this Sunday at 10:00 a.m.! Coffee Hour follows using Zoom. We have gone back to pre-recorded … END_OF_DOCUMENT_TOKEN_TO_BE_REPLACED

The members of three Wilmington Churches continue their collaboration on issues of racial justice on Sunday, March 7, at 3:00 p.m. Please … END_OF_DOCUMENT_TOKEN_TO_BE_REPLACED

Our next 25th Anniversary Event is Sunday, March 14, at 3:00 p.m. The Zoom program on the 14th of March will continue the exploration of … END_OF_DOCUMENT_TOKEN_TO_BE_REPLACED

How to Observe a Holy Lent during a Pandemic.  I invite you, therefore, in the name of the Church, to the observance of a holy Lent, … END_OF_DOCUMENT_TOKEN_TO_BE_REPLACED

The Importance of Getting Vaccinated:  The vestry of SsAM and I strongly recommend that you schedule a COVID-19 vaccination when you … END_OF_DOCUMENT_TOKEN_TO_BE_REPLACED

Our building is closed but we are busier than ever! Monthly Walks for Justice and Peace First Fridays at 5:30 p.m. Next Walk is Friday, … END_OF_DOCUMENT_TOKEN_TO_BE_REPLACED

In February we celebrate the contributions of Black people. It is a time to reflect on the struggle for racial justice. 2021’s theme is “The … END_OF_DOCUMENT_TOKEN_TO_BE_REPLACED

You can make a one-time donation or set up a donation that repeats weekly or monthly. A click on the button will bring you to a secure … END_OF_DOCUMENT_TOKEN_TO_BE_REPLACED

Here is a list of books, articles, and videos that enlighten us about race, race relations, racial history, and related topics. Click here … END_OF_DOCUMENT_TOKEN_TO_BE_REPLACED

If you want to make your pledge to SsAM for 2021, you can use this on-line form, which does NOT ask for bank account or credit card … END_OF_DOCUMENT_TOKEN_TO_BE_REPLACED