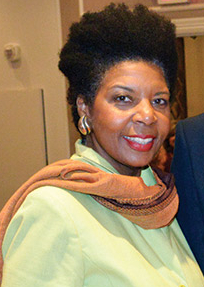 Director of Cultural Affairs for the City of Wilmington, Tina Betz is known for her role in coordinating and raising funds for numerous large-scale events and community arts projects, such as the DuPont Clifford Brown Jazz Festival, Martin Luther King, Jr. Day Community Celebration, the City’s Independence Day celebration, Art-On-The-Town.  She also developed innovative and successful projects such as the Wilmington Children’s Chorus, the Fringe Wilmington Festival, Clifford Brown Year Round concert series, and the City’s first and only theater dedicated to independent films, filmmaking and filmmakers, Theatre N at Nemours.

A classically trained singer, Tina is not only a member of the SsAM Collegium, but performs frequently at SsAM and throughout the community as highly sought after vocalist.  Also well known as an actor, recent credits include narration with the Delaware Symphony Orchestra (Copeland’s The Promise of Living vocal ensemble and Lincoln Portrait narration), First State Ballet Theatre (Nutcracker Suite narrator), and lead roles in countless shows from Sweeney Todd to The Vagina Monologues.

Tina has served on the board of many local arts organization as well as the grant review panels for the National Endowment for the Arts, Pennsylvania Council for the Arts, Mid Atlantic Arts Foundation, Pennsylvania Artists on Tour, Delaware Division of the Arts, and New Jersey Council on the Arts. Her contributions to the community have been recognized with the YMCA’s Black Achiever’s award; Christiana Cultural Arts Center’s “Christi Award” for Outstanding Achievement by an artist; Girls Inc.’s Strong, Smart and Bold award; and Cab Calloway School of the Arts’ Arts Smarts Award for commitment to the arts in the community.

Video of our Service

Every Sunday at 10:30 a.m., a live video of our worship service is available on Facebook. It is also available after the service. Click here to watch the video on our Facebook page.

FATHER DAVID’S BLOG OF 1/10/2020: The goal of dinner groups is to bring 8-10 folks together to share a meal and fellowship. Each group will … END_OF_DOCUMENT_TOKEN_TO_BE_REPLACED

FATHER DAVID’S BLOG of 1/3/2020: A blessed New Year to everyone. This week I am sharing Richard Rohr's daily meditation from New Year’s … END_OF_DOCUMENT_TOKEN_TO_BE_REPLACED

“The reactions have been amazing. Some were in tears. Every mother who picked up bags/boxes of wrapped presents were overwhelmed by the huge … END_OF_DOCUMENT_TOKEN_TO_BE_REPLACED

Here are links to only the most recent recordings of sermons at SsAM, one sermon from each preacher. Click here to see all the sermons of … END_OF_DOCUMENT_TOKEN_TO_BE_REPLACED

Click the triangle below to watch an inspiring six-minute video in which Silas, who was homeless, tells his story of finding a spiritual … END_OF_DOCUMENT_TOKEN_TO_BE_REPLACED

It’s easy to make a donation to the Episcopal Church of Saints Andrew & Matthew in Wilmington, Delaware. Just click this button.

Click here for directions and parking. We are just a block from 8th and Market in downtown Wilmington. Type “713 N. Shipley Street 19801” into your GPS.