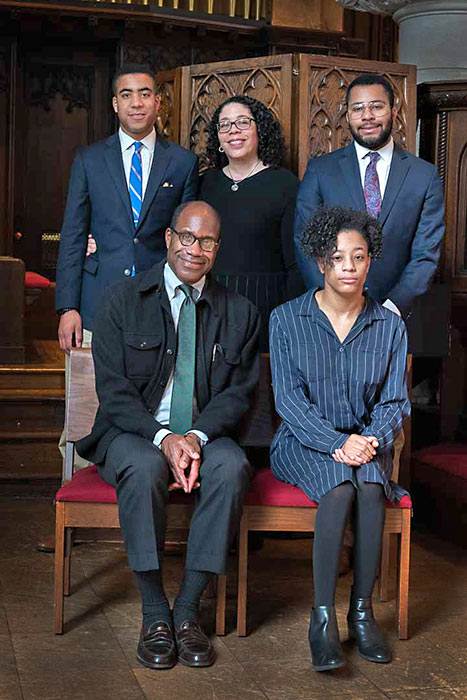 In 2016, when he was elected to the SsAM Vestry, Steven Jones wrote the words below to introduce himself to the congregation. Since then he has served as Senior Warden and, when this photo was taken in January, 2020, he served on the Finance Committee. He has also been blogging on this website about encouraging institutions to use locally-grown food.

“Initially my wife and I attended Sts. Andrew and Matthew beginning in 1996. Both our sons were baptized at SsAM by Canon Casson. For awhile we moved from Delaware to the Eastern Shore of Maryland, and attended Shrewsbury Parish Church in Kennedyville, Maryland.

“To me what makes SsAM special is its position, initiatives, and diversity. This is a faith-driven institution taking action to address community challenges which are also national in scope. I believe SsAM is an important source of the Good News in Wilmington which must be strengthened.

“Professionally, I am the Founder and Director of an analytical consultancy specializing in regional economic impact assessments for non-profits. I have worked in a range of fields from the financial industry, to land preservation, to education.

“I have a BA from Hampshire College and a MS from the University of Delaware. Born in Brooklyn, New York, I served on Trinity Church’s Resources Committee and volunteered at St. Paul’s (Chapel) Shelter. I was past director of Project City Kids (New York), served on the Eastern Shore Land Conservancy board (Maryland), and currently serve as an advisor to the Working Harbor Committee (New York).”

Click here to see other photos of SsAM members by Danny Schweers.

I was very moved by the events of this past Wednesday, January 20, 2021, when Joe Biden and Kamala Harris took the oath to be the next … END_OF_DOCUMENT_TOKEN_TO_BE_REPLACED

Use Facebook to join us for worship this Sunday at 10:00 a.m.! Coffee Hour follows using Zoom. On Sunday, January 3, we go back to … END_OF_DOCUMENT_TOKEN_TO_BE_REPLACED

Sundays at 1:00 p.m., through January 24, 2021.  You are invited to develop a better understanding of how America’s race relations … END_OF_DOCUMENT_TOKEN_TO_BE_REPLACED

On Wednesday morning, January 6, 2021, I celebrated the Feast of the Epiphany with Morning Prayer on Facebook Live. That afternoon, the U.S. … END_OF_DOCUMENT_TOKEN_TO_BE_REPLACED

123 pledges from families and individuals have been made to SsAM’s 2021 pledge campaign. That’s 79% of the 155 pledges we hope to receive — … END_OF_DOCUMENT_TOKEN_TO_BE_REPLACED

If you want to make your pledge to SsAM for 2021, you can use this on-line form, which does NOT ask for bank account or credit card … END_OF_DOCUMENT_TOKEN_TO_BE_REPLACED

Please make a donation to a local food pantry! Children and families in our community are going hungry. You can help! So says our church’s … END_OF_DOCUMENT_TOKEN_TO_BE_REPLACED

First Fridays at 5:30 p.m. Date of next march has yet to be confirmed. Since June 19, 2020, SsAM and other churches have been sponsoring … END_OF_DOCUMENT_TOKEN_TO_BE_REPLACED

What a year 2020 was! Now we have so much to look forward to in 2021. The COVID vaccine is now available. In two and a half weeks, Joe Biden … END_OF_DOCUMENT_TOKEN_TO_BE_REPLACED