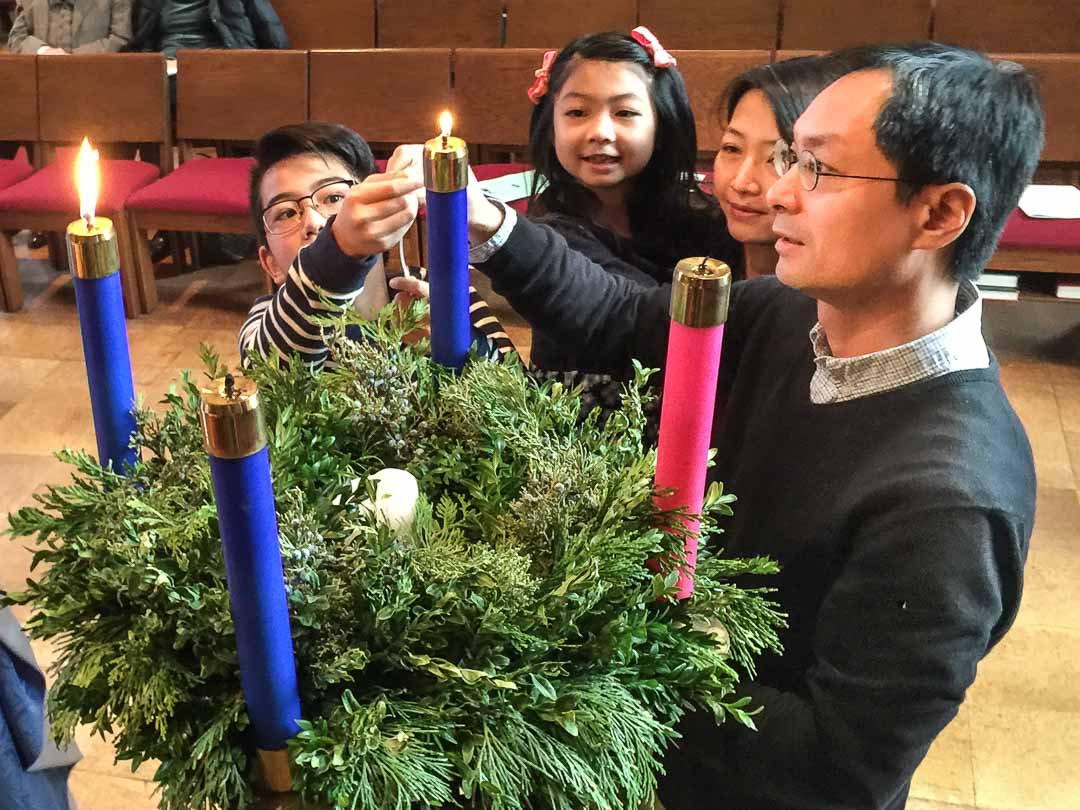 Join us as we prepare for the birth of Jesus during the season of Advent!

Advent, from the Latin adventus, means “coming”. Advent, a quiet time of watching and waiting, consists of the four Sundays before Christmas when we anticipate Christ’s coming into the world. It is a time of preparation.

The practice of keeping the church year dates back to 5th century Jerusalem. As Christians, we use different symbols during different seasons to visually express the basics of our faith and as reminders of the journey in Christ and with Christ in our life. Symbols can have heightened meaning for us when associated with particular seasons of that journey. You will notice several symbols in this first season of the Christian year.

The first symbol you will notice in the sanctuary is an Advent wreath, made by a member of SsAM. It consists of a circle of evergreen branches (symbolizing eternal life) and four candles, each representing the light of God coming into the world. The fifth candle is white and is called the Christ Candle. There is no one prescribed color for the candles, although several traditions exist. Some of you may remember the use of purple during Advent, representing a penitential theme for the season. In more recent years, however, blue is being used, reflecting the sense of hope and anticipation.

The candles are lit every Sunday in Advent after the Voluntary and Greeting. They are lit by some of the youngest members of the congregation and their families while the congregation sings a verse of the hymn “O come, O come, Emmanuel”. On the 1st Sunday, a blue candle (hope) is lit. On the 2nd Sunday we add the second blue candle (peace or preparation) while on the 3rd Sunday, the pink candle (joy) is lit. The 4th Sunday in Advent marks the lighting of the final blue candle (love).

Some families have Advent wreaths in their homes. They use the lighting of an Advent wreath and the reading of scriptures at home as a wonderful way to have the entire family involved in this time of preparation.

The Liturgy During Advent

In 2019, the first Sunday of Advent marks our moving into Year A of the three years of lectionary readings. Most of the Gospel readings come from the Gospel of Matthew.

During Advent, you will see that we include the Nicene Creed, dating from the 4th century, rather than the Liturgical Affirmation (from the New Zealand Prayer Book) or the Apostle’s Creed. In recent years, the language of the Nicene Creed was changed from “I believe” to “We believe” in recognition that we worship, not as individuals, but as members of the body of Christ.

The remainder of the Advent liturgy follows the same format that was discussed in the Unfolding leaflet for Pentecost and the Season of Creation. (Copies are available from the Church Office if you missed getting one).

Compiled and written by D-L Casson.

Use Facebook or YouTube to worship with us this Sunday at 10:00 a.m.! Coffee Hour follows using Zoom (but not on Palm Sunday or Easter … END_OF_DOCUMENT_TOKEN_TO_BE_REPLACED

Upcoming Events: Our building is closed but we are busier than ever! Our next 25th Anniversary Event is Sunday, April 18, at 3:00 … END_OF_DOCUMENT_TOKEN_TO_BE_REPLACED

In the first months of 2021, SsAM formed a Men’s Fellowship Ministry for the purposes of promoting fellowship among the men of the church … END_OF_DOCUMENT_TOKEN_TO_BE_REPLACED

Please make a donation to a local food pantry! Children and families in our community are going hungry. You can help! As the … END_OF_DOCUMENT_TOKEN_TO_BE_REPLACED

First Fridays at 5:30 p.m. Next walk is May 7. Since June 19, 2020, members from SsAM and other churches have been showing up for silent … END_OF_DOCUMENT_TOKEN_TO_BE_REPLACED

The members of three Wilmington Churches continue their collaboration on issues of racial justice on Sunday, March 7, at 3:00 p.m. Please … END_OF_DOCUMENT_TOKEN_TO_BE_REPLACED

Our church is looking for four new Vestry members to serve three-year terms beginning in June, 2021. Is that you? Someone you know? The … END_OF_DOCUMENT_TOKEN_TO_BE_REPLACED

You can make a one-time donation or set up a donation that repeats weekly or monthly. A click on the button will bring you to a secure … END_OF_DOCUMENT_TOKEN_TO_BE_REPLACED