You are here: Home / ORGAN PROJECT

INSTALLATION OF THE
KATHERINE ESTERLY ORGAN 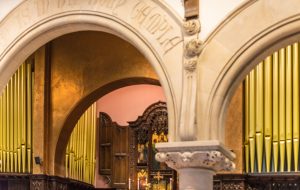 The installation of the Katherine Esterly Organ began on Monday, March 7, 2016.

CLICK HERE to see photos of the installation and learn about upcoming events on our Katherine Esterly Organ Facebook page.

CLICK HERE to see the TONAL SPECIFICATIONS of the new organ!

PHOTOS: The Dedication of the Katherine Esterly Organ, February 19, 2017.

WHY A NEW ORGAN?

As many have experienced, the music at the Episcopal Church of Saints Andrew and Matthew, during the services and at special events, is well known to lift the spirits and nourish the souls of those in attendance. However, the organ reached the end of its useful life cycle several years ago; in its place currently is a temporary electronic organ.

After a lengthy in-depth process of research and evaluation, the Organ Committee at SsAM developed a plan for rebuilding and improving this 60-year-old organ. Quimby Pipe Organs, Inc., specializing in organ designs closest to the unique musical needs of parishes, was selected. They were also chosen because they best understood SsAM’s philosophy as well as our desire to incorporate pipes from the three former parishes that have consolidated into one… St. Andrew’s, St. Matthew’s and the Cathedral Church of Saint John’s.

This renovation has improved the organ’s sound and will maintain the instrument for years to come. An enhanced organ honors the excellence of our choir and looks forward to the blending of young voices of the Cathedral Choir School of Delaware.

Because of SsAM’s location in downtown Wilmington and its commitment to serving as a spiritual, cultural and social force in the community, the new organ will have an impact on music and culture far beyond the context of worship. Being particularly well designed as a bold concert instrument, it will also support the many groups that perform regularly at SsAM as well as attract additional musical groups.

The new organ has been named after Dr. Katherine (Kitty) L. Esterly, a revered and honored pediatrician, a beloved and respected member of our congregation and of our state.  She has been a major proponent of the new organ, understanding its importance to the congregation and the community.  The organ was dedicated on February 19, 2017. 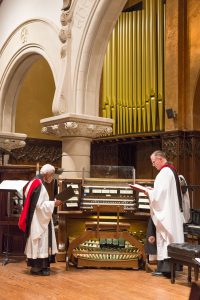 Video of our Service

Every Sunday at 10:30 a.m., a live video of our worship service is available on Facebook. It is also available after the service. Click here to watch the video on our Facebook page.

FATHER DAVID’S BLOG OF 1/10/2020: The goal of dinner groups is to bring 8-10 folks together to share a meal and fellowship. Each group will … END_OF_DOCUMENT_TOKEN_TO_BE_REPLACED

FATHER DAVID’S BLOG of 1/3/2020: A blessed New Year to everyone. This week I am sharing Richard Rohr's daily meditation from New Year’s … END_OF_DOCUMENT_TOKEN_TO_BE_REPLACED

“The reactions have been amazing. Some were in tears. Every mother who picked up bags/boxes of wrapped presents were overwhelmed by the huge … END_OF_DOCUMENT_TOKEN_TO_BE_REPLACED

Here are links to only the most recent recordings of sermons at SsAM, one sermon from each preacher. Click here to see all the sermons of … END_OF_DOCUMENT_TOKEN_TO_BE_REPLACED

Click the triangle below to watch an inspiring six-minute video in which Silas, who was homeless, tells his story of finding a spiritual … END_OF_DOCUMENT_TOKEN_TO_BE_REPLACED

It’s easy to make a donation to the Episcopal Church of Saints Andrew & Matthew in Wilmington, Delaware. Just click this button.

Click here for directions and parking. We are just a block from 8th and Market in downtown Wilmington. Type “713 N. Shipley Street 19801” into your GPS.