ALL UPCOMING SPECIAL EVENTS at SsAM
have been cancelled or postponed!

Presented by the Friends of the Katherine Esterly Organ 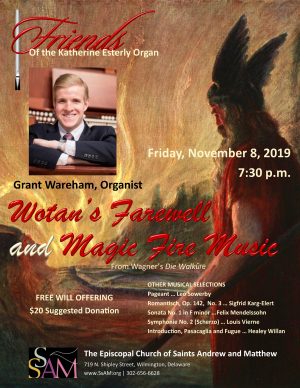 Click this link for a downloadable PDF of the above flier
Friday, November 8, 2019
7:30 p.m.
Organ Recital – Grant Wareham 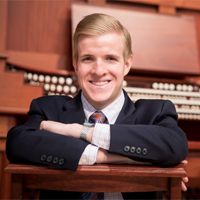 Grant Wareham is a recent graduate of Rice University’s Shepherd School of Music. While at Rice, Grant served as Moseley Memorial Organ Scholar and assistant organist at St Thomas’ Episcopal Church in Houston, and then as associate organist at Palmer Memorial Episcopal Church. Winner of both the First and Audience Prizes at the Albert Schweitzer Organ Competition in Hartford, CT in 2017, Grant is currently pursuing his master’s of music degree at the Yale University Institute of Sacred Music and School of Music. He also serves as organ scholar at Christ Church in New Haven, CT. 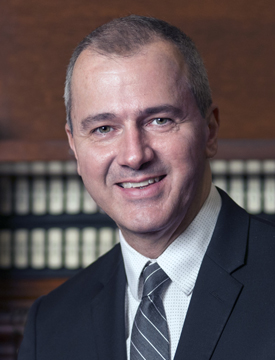 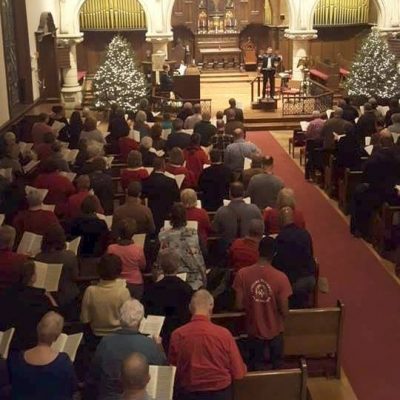 Bring your Score, or borrow one at the door.
FREE WILL OFFERING
SUGGESTED DONATION $10

Marc has served as Director of Music for St. Thomas’s Episcopal Parish in Newark, DE since 2004.  Before that he was Organist/Choirmaster of St. Andrew’s School in Middletown, Delaware for 30 years.  Among his many duties, he formed and directed a select ensemble of about 16-18 singers chosen by audition.  The Concert Choir made numerous concert tours of Western Europe, appeared several times at the White House, and issued many recordings.

While in college Marc was an active “Theatre Organist,” playing every Friday evening at the historic Lansdowne Theatre, just outside Philadelphia.  He has performed many times on the well-known John Dickinson Theatre Organ in Wilmington.

He is known for his accompaniments to major silent films, having played for numerous films over the years all over the Delaware Valley.

Marc has appeared countless times as a recitalist.  His programs are marked by a delightful combination of serious organ works, orchestral transcriptions, and colorful novelty works.  Since 1981 he has been a regular recitalist (especially during the Christmas season) on the renowned Ballroom Organ at Longwood Gardens, Kennett Square, PA , and has been fortunate to play informally many of the great cathedral organs of England and France.  Recently he has become a regular organist on the Midmer-Losh organ in Boardwalk Hall, Atlantic City.  This is the largest pipe organ in the world.

A prolific choral composer, Marc also writes and arranges extensively for the organ.  Three of his works are published by Warner, Inc. 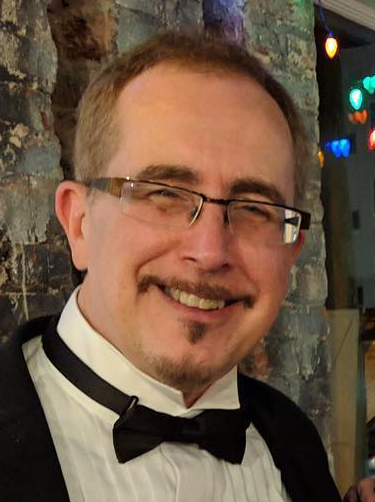 David Christopher has a varied career as organist, conductor, church musician and teacher. Born in Philadelphia and raised in southern Delaware, David received his undergraduate degree at West Chester University and graduate degree in organ performance from the Peabody Conservatory in Baltimore.  David gave his first organ recital at the age of 14 and was appointed organist and choirmaster at St. Peter’s in the Great Valley (Paoli, PA) at the age of 17. Soon afterwards, he became a frequent performer at Longwood Gardens following Clarence Snyder’s retirement as resident organist. David went on to study with some notable organ teachers including Robert Elmore, Harry Wilkinson, Alan Morrison and more recently Donald Sutherland at the Peabody Conservatory of Music.

As a well known conductor, David was the founding conductor of the Wilmington Children’s Chorus, has served as associate conductor for OperaDelaware, conductor of the City of Wilmington’s All-American Tribute Orchestra, and currently is the conductor and music director of Delaware ChoralArts.   Since April of 2001, David has served as the organist and director of music for The Episcopal Church of Saints Andrew and Matthew (SsAM), a dynamic parish and center for music and the arts in downtown Wilmington, Delaware. 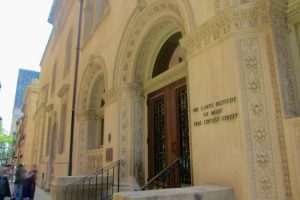 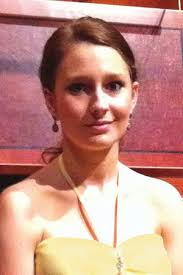 SAMANTHA KOCH is a native of Arisdorf, Switzerland.  She received a  Bachelor of Music in organ performance from the East Carolina  University  School  of  Music in 2012 and a Master of Music in Organ Technology, with an additional concentration in Organ Performance, from the American Organ Institute at the University of Oklahoma in 2016.  During her time at the American Organ Institute, Samantha studied organ with Dr. Damin Spritzer and Dr. John Schwandt.  She also gained experience in flue and reed voicing, pipe making, tuning, and general organ construction and design.

Samantha has played recitals across the United States including performances at National City Christian Church in Washington, D.C., Bruton Parish Episcopal Church in Williamsburg, Va, and Methuen Memorial Music Hall in Methuen, Massachusetts.  She was a  finalist in the Region IV AGO competition for young organists.  Organ teachers have included Susan  Talley,  Janette  Fishell,  and  Andrew  Scanlon and she has served as organ  scholar  at  Providence  United  Methodist  Church  in  Charlotte,  N.C.

Samantha is an associate member of the American Institute of Organbuilders.  She is also a member of MENSA and speaks German, French Italian and English fluently.

First Fridays at 5:30 p.m. Next walk is Friday, March 5! Since June 19, 2020, SsAM and other churches have been sponsoring silent Walks … END_OF_DOCUMENT_TOKEN_TO_BE_REPLACED

Use Facebook or YouTube to worship with us this Sunday at 10:00 a.m.! Coffee Hour follows using Zoom. We have gone back to pre-recorded … END_OF_DOCUMENT_TOKEN_TO_BE_REPLACED

The members of three Wilmington Churches continue their collaboration on issues of racial justice on Sunday, March 7, at 3:00 p.m. Please … END_OF_DOCUMENT_TOKEN_TO_BE_REPLACED

Our next 25th Anniversary Event is Sunday, March 14, at 3:00 p.m. The Zoom program on the 14th of March will continue the exploration of … END_OF_DOCUMENT_TOKEN_TO_BE_REPLACED

How to Observe a Holy Lent during a Pandemic.  I invite you, therefore, in the name of the Church, to the observance of a holy Lent, … END_OF_DOCUMENT_TOKEN_TO_BE_REPLACED

The Importance of Getting Vaccinated:  The vestry of SsAM and I strongly recommend that you schedule a COVID-19 vaccination when you … END_OF_DOCUMENT_TOKEN_TO_BE_REPLACED

Our building is closed but we are busier than ever! Monthly Walks for Justice and Peace First Fridays at 5:30 p.m. Next Walk is Friday, … END_OF_DOCUMENT_TOKEN_TO_BE_REPLACED

In February we celebrate the contributions of Black people. It is a time to reflect on the struggle for racial justice. 2021’s theme is “The … END_OF_DOCUMENT_TOKEN_TO_BE_REPLACED

You can make a one-time donation or set up a donation that repeats weekly or monthly. A click on the button will bring you to a secure … END_OF_DOCUMENT_TOKEN_TO_BE_REPLACED

Here is a list of books, articles, and videos that enlighten us about race, race relations, racial history, and related topics. Click here … END_OF_DOCUMENT_TOKEN_TO_BE_REPLACED

If you want to make your pledge to SsAM for 2021, you can use this on-line form, which does NOT ask for bank account or credit card … END_OF_DOCUMENT_TOKEN_TO_BE_REPLACED