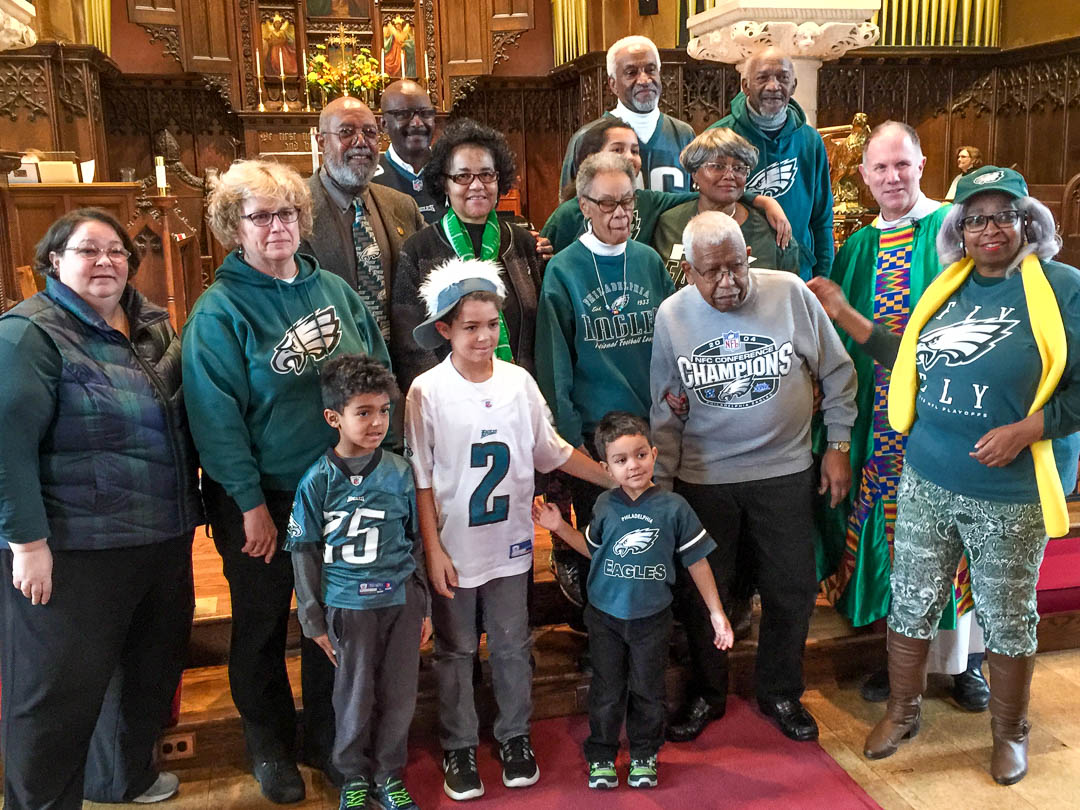 On Super Bowl Sunday, 2018, several people attended the 10:30 a.m. worship service at SsAM in their Eagles football team clothes. Fr. David joked that the robes he was wearing were green to show his support of the Eagles. (Actually, every church season has its preferred colors; Epiphany, the season after Christmas, just happens to be green. There was no divine intervention in this.)

One of the scripture readings for the day was from Isaiah, Chapter 40 — “…but those who hope in the Lord will renew their strength. They will soar on wings like eagles…”. The reading was not chosen to support the local football team, it just happened that way. There was no divine intervention in this.


All the preceding week, The Episcopal Church of the Ascension in Claymont, Delaware, had this posted on the sign in front:

Number of times mentioned
in the Bible:
Eagles 38,  Patriots 0

The actual final score was Eagles 41, Patriots 33. Many believe there was no divine intervention in this. They believe that the better team won.

Photo and text by Danny Schweers.

Use Facebook or YouTube to worship with us this Sunday at 10:00 a.m.! Coffee Hour follows using Zoom (but not on Palm Sunday or Easter … END_OF_DOCUMENT_TOKEN_TO_BE_REPLACED

Upcoming Events: Our building is closed but we are busier than ever! Our next 25th Anniversary Event is Sunday, April 18, at 3:00 … END_OF_DOCUMENT_TOKEN_TO_BE_REPLACED

In the first months of 2021, SsAM formed a Men’s Fellowship Ministry for the purposes of promoting fellowship among the men of the church … END_OF_DOCUMENT_TOKEN_TO_BE_REPLACED

Please make a donation to a local food pantry! Children and families in our community are going hungry. You can help! As the … END_OF_DOCUMENT_TOKEN_TO_BE_REPLACED

First Fridays at 5:30 p.m. Next walk is May 7. Since June 19, 2020, members from SsAM and other churches have been showing up for silent … END_OF_DOCUMENT_TOKEN_TO_BE_REPLACED

The members of three Wilmington Churches continue their collaboration on issues of racial justice on Sunday, March 7, at 3:00 p.m. Please … END_OF_DOCUMENT_TOKEN_TO_BE_REPLACED

Our church is looking for four new Vestry members to serve three-year terms beginning in June, 2021. Is that you? Someone you know? The … END_OF_DOCUMENT_TOKEN_TO_BE_REPLACED

You can make a one-time donation or set up a donation that repeats weekly or monthly. A click on the button will bring you to a secure … END_OF_DOCUMENT_TOKEN_TO_BE_REPLACED