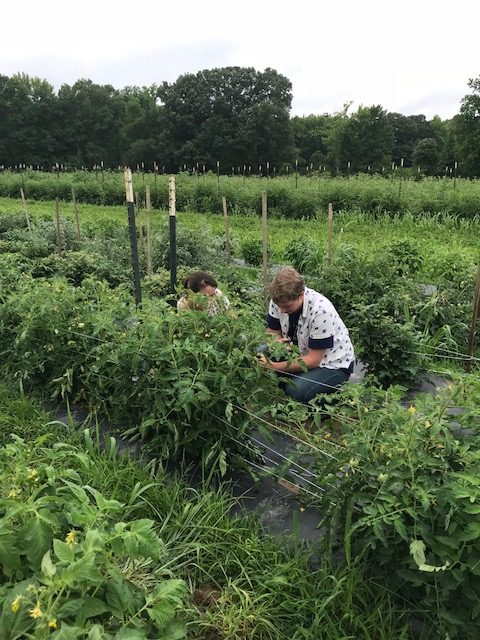 Environmental stewardship is a heady subject. To me it infers the nurturing of the very system that maintains our physical well-being. Odds are, because you are reading this, you probably agree that the system needs improvement.

There is nothing more sacred, humbling and frustrating than being in service to creation care. What is exciting is the new-found awareness of creation’s key service, supporting healthful food production. We are slowly acknowledging that we need to eat better. The Episcopal Church’s “Supporting Producers of Locally Grown Food” resolution empowers us to do just that while developing a model which intersects environmental creation care objectives with meeting local human needs.

The resolution was inspired by Sts. Andrew and Matthew in Wilmington, Delaware, parishioners who desire accessible fresh food outlets. This urban parish is like many where the central business district borders residential communities, outside of a seasonal downtown farmer’s market, fresh food access is limited. From the explanation of the resolution it may seem to be only a rural economic development plan. However, its scope is intended to impact the lives of those who lack fresh food variety and accessibility. Building productive capacity is the first and vital step. Exploring distribution models will follow.

As of the spring of 2018, a trial was developed. Camp Arrowhead in Lewes Delaware which hosts nearly 1,400 campers a year and like most resident programs spends a considerable amount on food, was eager to participate. The camp’s director: Walt Lafontaine, along with his wife Nancy, has been a supporter of maintaining a camp vegetable garden to further deepen the creation-food spiritual experience. Its chef, Jim Feaster, has been an advocate of sourcing local food for years and reached-out to neighboring farmers in the past. The blocker was logistics. The camp has limited storage capacity and requires frequent deliveries. Farmers were not able to accommodate that requirement. I connected them with a local distributor that can store as well as purchase food from local growers. Last season, Camp Arrowhead spent nearly ten percent of its total food expenditure locally.

This type of intentional procurement helps a family-owned local food distributor in Seaford, employing Sussex County residents. According to the U.S. Census, Delaware’s poverty rate is 13.6, in Seaford it is 21.2 percent. The median household income in Seaford was 29 percent lower than the state’s while the rate of persons without health insurance was 38 percent higher. Though small, this increased activity sends a market signal to food producers and community stakeholders alike.

This year the camp is preparing to expand their ordering and test a new web-based, regional food distribution hub www.chesapeakeharvest.com which will give buyers full-transparency as to the source of the food purchased at the farm level. Such a tool will empower buyers interested in intentionally directing their purchasing to communities, or growers that use e.g. organic or regenerative practices or are women-owned. It is also a platform that supports communication; buyers can get to know their farmers. Given the success Episcopal agricultural ministries have had nationally, the door may be open to collaborate with farmers in creating new and mutually rewarding ministries.

Although they may not refer to it as creation care, many of these growers are committed to using only natural fertilizers and non-toxic, pest controls in addition to sourcing their supplies, when possible, locally. They shun heavy equipment, tillage and glyphosate applications– all of which degrade healthy soil’s network of life which silently builds strong root structures a supports the crop’s nutrient uptake.

Commercial farming requires chemical fertilizers because the soil is assumed to be not fertile enough to support desired yields naturally. After years of their use this is probably true. Pesticides and herbicides degrade beneficial microbial activity while excess amounts enter our groundwater and waterways. Because Province III’s 13 dioceses support food producers that do not use these methods, we are directly supporting the community of environmental stewards around us represented by organizations like Future Harvest CASA (www.futureharvestcasa.org). To them, farming requires stewardship.

There is no better and quicker way for the Episcopal Church to promote environmental stewardship. This is a graceful opportunity to directly demand what we want to see more of in the world by starting at home. Making it sustainable and scalable however requires: a spirit of partnership and deliberate purchasing.

This should not be a fad. The Province has several camps and conference centers from: Claggett Center in Adamstown, Maryland and Memorial House in Rehoboth, Delaware to Shrine-Mont in Richmond Virginia, and Peterkin in Romney, West Virginia. We can start conversations and hopefully more trials which will lead to activities that can have a positive ripple-effect through many of our province’s 245 counties. It will open the door to establishing new partnerships and alliances with e.g. community health stakeholders as this new local/regional value chain forms. Its growth will stimulate additional entrepreneurship, healthier eating and soil health. Yet all of this starts now and with us; this is our opportunity to be a more impactful neighbor to all (Luke 10:29-37), to aid in repairing creation and tie our institutional procurement to stewardship. This is the time to be intentional!

> Back to the Local Food, Local Institutions Blog.

Caiti Sullivan asked the board and staff of Future Harvest, the Chesapeake Alliance for Sustainable Agriculture, to read this post. She wrote:
Dear Board and staff, I wanted to highlight this post written by Board Vice President Steven Jones on the efforts of Province III of the Episcopal Church to source local food for their institutional dining. An inspiring effort to build local food infrastructure for the benefit of many!

Gail Taylor responded:
I love how beautiful and heartfelt this is written. It is inspiring to see churches take on the call of creation care. The farm I own is on land leased (for zero dollars!!!) from the Missionary Oblates of Mary Immaculate. There is a lot of room for growth in this community, drawing on inspiring stories like this one and the Black Church Food Security Network. Can we talk about this at the conference in January? Let’s highlight the role of churches in supporting the local food movement and the stewardship of the planet.