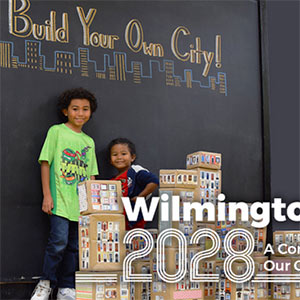 A full draft of Wilmington 2028: A Comprehensive Plan for Our City and Communities is now available for download. Click here or the photo to visit the website of the Wilmington Department of Planning and Development.

This new Citywide Comprehensive Plan represents the culmination of many months of research and outreach. With assistance from consulting firm Interface Studio, Wilmington has been able to gather input from over 2,500 citizens since August of 2017 through numerous participation platforms.

These included interviews, public forums, focus groups, surveys, and a steering committee that met regularly to guide the process. Participants were asked to rate their overall satisfaction and desires for the future on quality of life issues like public safety, sense of community, affordability, commuting time, parks and recreation, and housing.

The public engagement process included a survey in the fall of 2017 that captured the ideas and comments of more than 2,000 participants. There were also a series of five public meetings held throughout the City in the fall of 2017 where more than 200 citizens offered their input and ideas. Additionally, ten focus groups were convened in 2017 and 2018 to address issues such as economic development, environment, parks and recreation, and youth programs and services, during which participants made further recommendations regarding the plan. The final public meeting was held at the Children’s Museum, in October of 2018, which attracted more than 300 citizens who offered their thoughts and comments for the final plan document.

Use Facebook or YouTube to worship with us this Sunday at 10:00 a.m.! Coffee Hour follows using Zoom (but not on Palm Sunday or Easter … END_OF_DOCUMENT_TOKEN_TO_BE_REPLACED

Upcoming Events: Our building is closed but we are busier than ever! Our next 25th Anniversary Event is Sunday, April 18, at 3:00 … END_OF_DOCUMENT_TOKEN_TO_BE_REPLACED

In the first months of 2021, SsAM formed a Men’s Fellowship Ministry for the purposes of promoting fellowship among the men of the church … END_OF_DOCUMENT_TOKEN_TO_BE_REPLACED

Please make a donation to a local food pantry! Children and families in our community are going hungry. You can help! As the … END_OF_DOCUMENT_TOKEN_TO_BE_REPLACED

First Fridays at 5:30 p.m. Next walk is May 7. Since June 19, 2020, members from SsAM and other churches have been showing up for silent … END_OF_DOCUMENT_TOKEN_TO_BE_REPLACED

The members of three Wilmington Churches continue their collaboration on issues of racial justice on Sunday, March 7, at 3:00 p.m. Please … END_OF_DOCUMENT_TOKEN_TO_BE_REPLACED

Our church is looking for four new Vestry members to serve three-year terms beginning in June, 2021. Is that you? Someone you know? The … END_OF_DOCUMENT_TOKEN_TO_BE_REPLACED

You can make a one-time donation or set up a donation that repeats weekly or monthly. A click on the button will bring you to a secure … END_OF_DOCUMENT_TOKEN_TO_BE_REPLACED